Your Canadian source for all things motorcycle!

See ALL News, archives, and categories

The new Harley-Davidson Forty-Eight motorcycle is a Factory custom bike in the legendary tradition of the hot rod Sportster line with the raw, elemental appeal of the Dark Custom bikes. 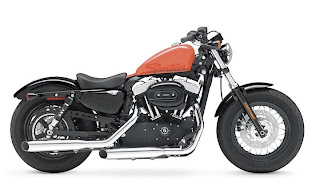 With radical attitude and straight-on style, the Forty-Eight model will not break the bank, starting at just $12,479 Canadian MSRP in Vivid Black.

“With its classic ‘bulldog shoulders’ stance, the Forty-EightT [model] strikes a distinctive look and low profile that could only come from Harley-Davidson [Motor Company],” said Ray Drea, Senior Director of Styling at Harley-Davidson. “The Forty-Eight model has a collective past-life experience and broken-in look that is raw and authentic.”

Harley-Davidson Sportster models like the Forty-Eight bike have retained an aura of rebellion since their introduction in 1957, when the foundation of custom culture was laid by hot rod gearheads hanging out on city street corners, in gritty garages, or at dusty drag strips. Sportster motorcycles became an iron canvas for many legendary choppers of that hot rod era and beyond.

Lying low from tire-to-tire, the Forty-Eight model showcases more of its black 1200 Evolution radical attitude and straight-on style V-Twin engine with polished accents and other components with a clean look, highlighted by the traditional “peanut” fuel tank, small solo seat, and lightening holes in the backbone mounting bracket.

With a smooth ride on new front fork sliders, a tall and fat front tire and slammed rear suspension, the Forty-Eight bike has more than just custom cool styling.

The Forty-Eight model embraces the street up front with forward foot controls, a low-profile custom handlebar, under-mounted mirrors, fork-mounted turn signals, a slammed speedometer mounting bracket, and a fork brace with lightening holes. A unique dual texture solo seat with a height of 26 inches fits the lone rider, while a passenger pillion, footpegs, and a backrest are some of the many accessories that can be added.

The Forty-Eight model comes in Vivid Black, Brilliant Silver, and Mirage Orange Pearl colours, and with a Canadian suggested Retail price of $12,479 for black and $12,819 for pearl colours, it will be available soon at Harley-Davidson Retail locations across Canada.